City Council meetings are televised live on Grover Beach local government cable access Channel 20 and are live streamed on the City's website and on www.slo-span.org. Members of the public may provide public comment during the meeting by calling (805) 321-6639 to provide public comment via phone (the phone line will open just prior to the start of the meeting at 6:00 PM) or written public comments can be submitted via email to gbadmin@groverbeach.org to be received prior to the Council meeting. If submitting written comments in advance of the meeting, please note the agenda item. Written comments will be read out loud during the City Council meeting on the appropriate agenda item subject to the customary 3-minute time limit.  City Council audio files from previous meetings are also available online.

Agendas are available prior to the meetings.
Most Recent Agenda and Staff Report | View All

On March 28, 2022 the City Council adopted Ordinance No. 22-02 which changed the City's "at-large" election system to a "district-based" system in which each Council Member seat is elected by the voters in the district in which the candidate resides.  The office of Mayor still remains directly elected "at-large" for a two-year term. The office of Council Member is a four-year term, with terms expiring at staggered intervals. General Municipal Elections are held on the first Tuesday in November of even-numbered years. At the first meeting in December, the Mayor selects a member of the City Council to serve for one year in the position of Mayor Pro Tem (pursuant to Resolution No. 08-18). 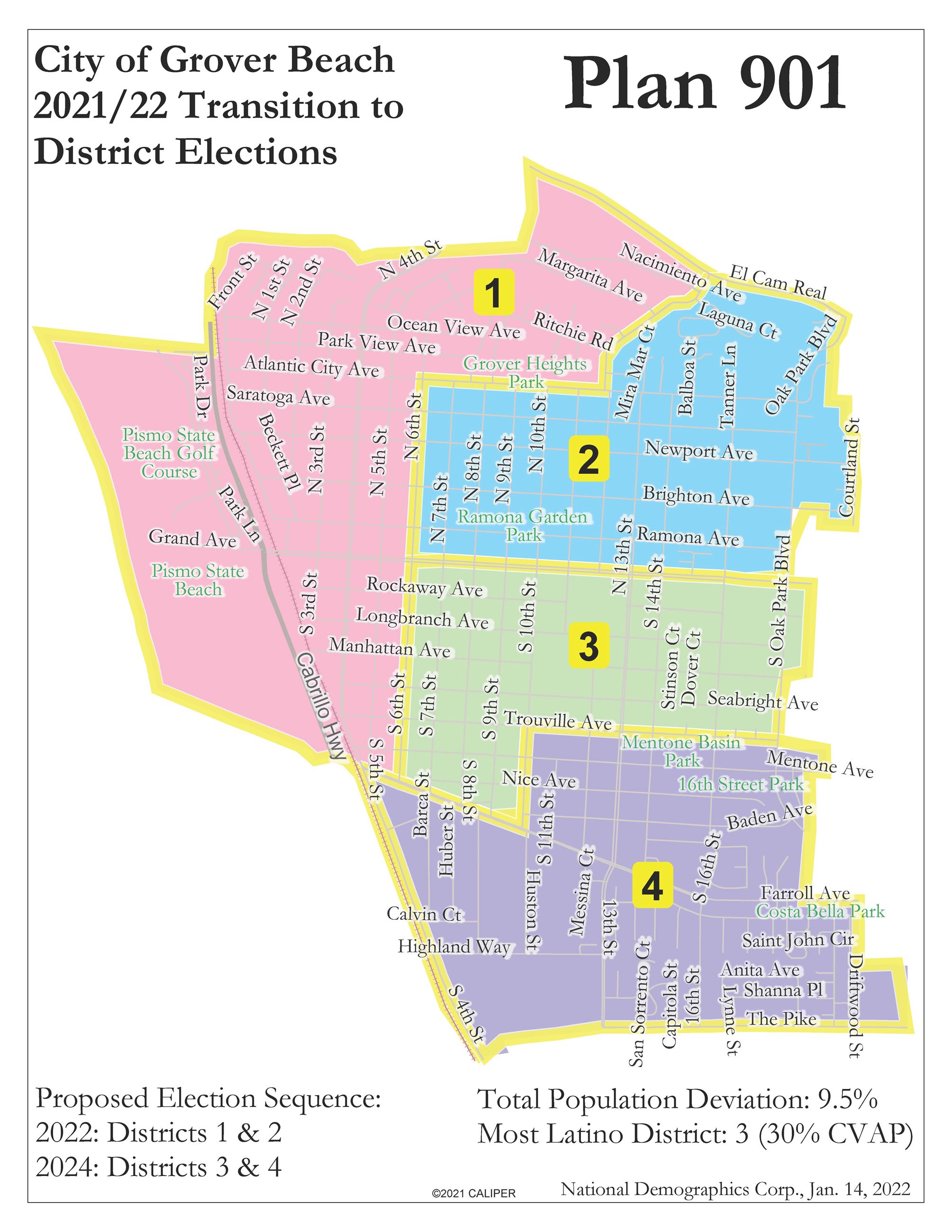 The Mayor and Council Members are not full-time officials. They are business people, homemakers, retirees, and employees from all of life’s endeavors. They are citizen representatives charged with developing the City’s policies, approving ordinances and resolutions, making land use decisions, approving agreements and contracts, and hearing appeals on decisions made by City staff or advisory committees. Each Council Member also represents the City as a liaison to various regional boards and commissions.

The City Council holds regular meetings, which are open to the public, on the second and fourth Mondays of the month at 6:00 p.m. in the Council Chambers located at 154 S. Eighth Street. Special meetings are held as necessary. A complete agenda packet is available for public review by 5:00 p.m. on the Thursday preceding Council meetings on the City’s website at www.groverbeach.org. You may subscribe to receive automatic email notifications when agendas and meetings are posted using the “Notify Me” feature located on the City’s website.

The City Council annually sets goals to determine the highest priorities for the City organization to implement each fiscal year.  The goals are identified in three categories of relative priority: Major City Goals, Other Important Goals, and Address as Resources Permit.  On March 14, 2022, the Council adopted an update set of goals for FY 2022-23 shown here following a goal-setting process with community input.  This input includes a community survey conducted every two years to get perceptions from a representative sample of residents on City services and key issues facing Grover Beach (click here for the most recent survey results from November 2021).